3 takeaways from sloppy loss to Timberwolves 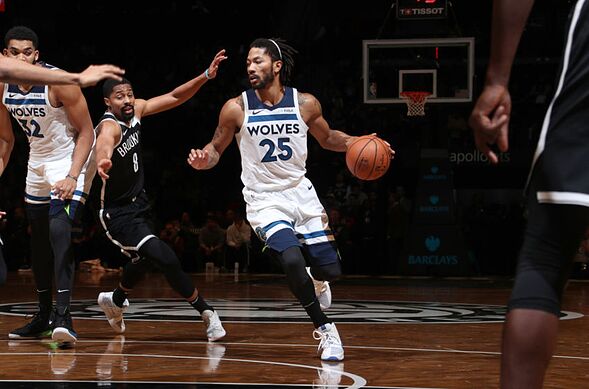 The Brooklyn Nets started slowly Friday and didn’t get into a groove until the hill was too steep to climb in a 112-102 loss to the Minnesota Timberwolves.

The Brooklyn Nets lost their 11th straight noon tipoff on Friday, reviving in time to make it close in the fourth quarter after the damage had already been done in a 112-102 loss to the Minnesota Timberwolves at Barclays Center.

The Timberwolves completed a season sweep of the Nets with the win and were victories at Barclays Center for the first time in three meetings.

Minnesota (8-11) snapped a two-game losing streak and is now 4-2 since trading Jimmy Butler to the Philadelphia 76ers — who will be on the docket when Brooklyn next plays on Sunday.

The Nets fell into two habits they had mostly mastered this season, shooting themselves in the foot repeatedly with turnovers and not quite answering the call for the third quarter.

Brooklyn turned the ball over 19 times to just seven for Minnesota, leading to a 31-7 edge for the Tmberwolves in points off turnovers. In a 10-point game, that seems important.

As for the third quarter, The Wolves held a 54-49 edge at the break and the Nets were able to keep it that close despite shooting only 41.9 percent and turning the ball over 10 times because All-Star center Karl-Anthony Towns was limited to eight minutes and two points in the first half due to foul trouble.

Towns played a little more than 10 minutes before getting his fourth foul in the third period and dominated with 17 points and five rebounds. Minnesota outscored Brooklyn 35-23 and led by as many as 18 points in the quarter.

It was a fairly thorough working over.

The Nets did make it interesting in the fourth quarter, getting as close as four point at 104-100 on Spencer Dinwiddie‘s two free throws with three minutes to go.

Rondae Hollis-Jefferson erased a shot on the low block from Towns, but Dinwiddie misfired on a 3-pointer from above the break. Derrick Rose hit a bank shot from the wing, Joe Harris turned the ball over when Hollis-Jefferson wasn’t looking for a pass and Robert Covington made it an eight-point deficit with a backdoor cut for a dunk.

That just about finished things for the Nets. Harris acknowledged the sluggish start.

Harris and Dinwiddie paced the Nets with 18 points each, with Dinwiddie adding eight assists. DeMarre Carroll finished with 13 points and seven rebounds.

It will be another early start for Brooklyn on Sunday evening, as they face the 76ers for the second time this season for a 6 p.m. Eastern tip. The Nets clobbered Philadelphia 122-97 in the first meeting on Nov. 4.

Here are three takeaways from a loss that can only be classified as a bad one.