3 things to watch in 1st meeting with 76ers 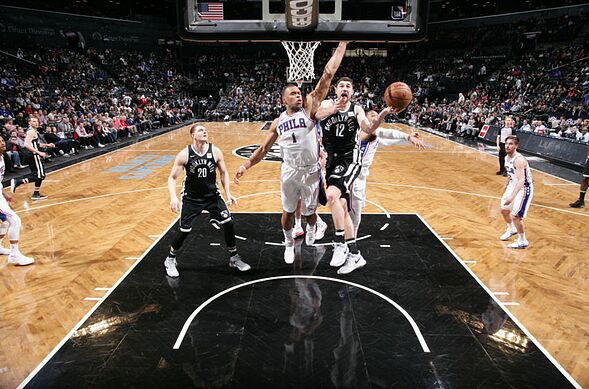 The Brooklyn Nets close out a 3-game homestand Sunday evening when they host the Philadelphia 76ers at Barclays Center. Here are 3 things to watch.

The Brooklyn Nets get one more look at their homecourt at Barclays Center, where they are 2-2 this season, Sunday evening with the Philadelphia 76ers visiting before embarking on a four-game Western Conference road trip.

They will face a 76ers team coming in for the second game of a back-to-back, having beaten the Detroit Pistons in Philadelphia on Saturday 109-99.

The Nets have dropped four of their last five games, while Philadelphia (6-4) has won four of five. But the 76ers are winless on the road so far this season, going 0-4.

The game matches two teams at vastly different stages of recent rebuilding efforts, with Philadelphia emerging as a playoff team last season after a four-season stretch in which they won just 75 games, including a 72-loss campaign in 2015-16.

Brooklyn (3-6), on the other hand, is still climbing out of the hole in which it found itself in the wake of some win-now personnel decisions earlier this decade that couldn’t have worked out much more poorly.

The Nets are still finding the solution to playing a complete 48-minute game elusive, as their last two games have been marked by building big early leads and then squandering them almost as quickly as they were put together.

Brooklyn came back from a late deficit against the Pistons on Wednesday to grab an overtime victory, but the Houston Rockets on Friday did not allow the Nets to regain their momentum after Brooklyn blew a 14-point lead late in the first half.

Here are three things to watch as the 76ers battle the Nets at Barclays Center, with tipoff Sunday evening set for 6 p.m. Eastern (now Standard) Time.

Sixers Science: Things To Know vs. Brooklyn Nets
How to watch Sunday’s game