3 things to watch in visit to South Beach 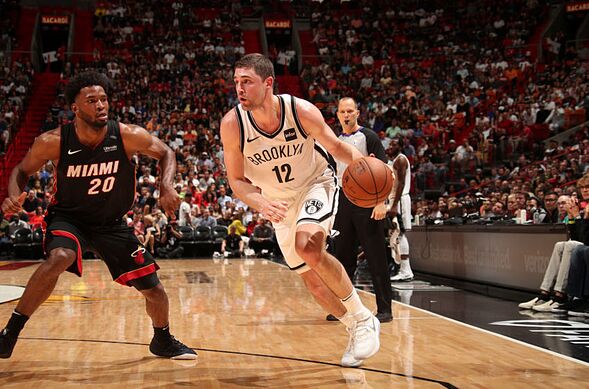 The Brooklyn Nets take on the Miami Heat Tuesday for the 2nd time in less than a week, but there are major differences for both teams this time around.

The Brooklyn Nets make the return trip to Miami just six days after Miami laid a 120-107 loss on the Nets at Barclays Center on Wednesday.

But on Tuesday at 7:30 p.m. from AmericanAirlines Arena in Miami, each team will be entering from vastly different positions than they were in last week.

For the Nets, center Jarrett Allen is back in the lineup after missing two games last week, including the loss to the Heat.

Meanwhile, Miami will be without point guard Goran Dragic, who scored 21 points with four assists on 8-of-15 shooting at Barclays Center last week. Dragic had his right knee drained and will be out for at least the next three games.

The only other point guard listed on Miami’s roster is Tyler Johnson, who averaged just 2.4 assists in 27.2 minutes per game. Josh Richardson and Rodney McGruder may also see some time running the offense for the Heat (6-10).

Miami has lost its last two games and five of its last six, with its only win being the victory at Brooklyn. The Heat have also lost four straight at home, most recently a 113-97 humbling at the hands of the Los Angeles Lakers on Sunday in which LeBron James lit them up for 51 points.

The Nets (7-10) have followed up their modest three-game winning streak from Nov. 4-9 with four losses in their last five outings, including a 127-119 loss to the LA Clippers on Saturday in which they squandered a 13-point lead in the second half.

Here are three things to watch as the Nets try to beat the Heat, besides the obvious ones such as drinking lots of water and wearing light-colored clothing.