5 takeaways from a big win at Cleveland 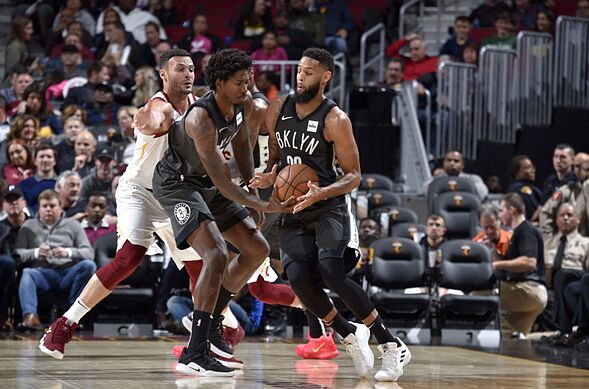 The Brooklyn Nets on Wednesday night rode a 23-5 run to open the third quarter, blowing open what had been a close game at Quicken Loans Arena en route to a 102-86 pummeling of the Cleveland Cavaliers.

Yes, a big third quarter by the Nets rather than against the Nets.

It was just one of a bunch of trends Brooklyn reversed Wednesday night. The Nets won in Cleveland for the first time since April 3, 2013, to snap a 10-game losing streak at the Q. They had fewer turnovers than an opponent for the first time this season.

The 38 points in the third quarter was the most by the Nets in a single quarter since they hung 40 on the Toronto Raptors in the first quarter at Barclays Center on March 13, a game which they lost 116-102.

The win was also their first on the road this season after losses at Detroit and Indiana and Brooklyn improved to 2-2 while dropping the four-time defending Eastern Conference champion Cavs to 0-4.

The game marked the season debuts for Rondae Hollis-Jefferson and Shabazz Napier (also making his Nets debut) and both provided sparks off the bench, even as they struggled to find the shooting touch.

The Cavaliers stayed in the game because of their edge on the offensive glass. Tristan Thompson had six of Cleveland’s 12 offensive boards in the first half as the Cavs outscored Brooklyn on second-chance points by a 12-2 margin.

Jared Dudley played a big part in that run, hitting three 3-pointers, while Joe Harris added seven points in the quarter. Cleveland was just 7-for-18 in the period and turned the ball over four times, leading to nine Nets’ points.

Brooklyn cooled in the fourth, but still shot 55 percent (22-for-40) in the second half.

The Nets finished with 14 turnovers, three of which came in garbage time after the benches had been emptied. Cleveland gave it up 15 times. Brooklyn only had 23 games last season in which they had fewer turnovers than their opponents and this was the first time this season.

D’Angelo Russell led the Nets with 18 points and eight assists. Harris finished with 16 points and Ed Davis came off the bench for his first double-double as a Net with 10 points and 10 rebounds.

All five Nets starters finished in double figures, as Dudley had 12 points and Jarrett Allen and Caris LeVert had 10 apiece. LeVert put together a solid second half, going 4-for-5 with eight points after a 1-for-7 showing in the first half.

Kevin Love, Collin Sexton and Jordan Clarkson scored 14 points each for Cleveland, with Love and Thompson each getting 11 rebounds. Thompson and Larry Nance Jr. had four assists each.

But the Nets shut Love down in the second half, holding him to four points on 1-of-2 shooting in 12 minutes.

The Cavs had a 16-8 edge on the offensive glass, but just a 14-13 advantage in second-chance points for the game. Thompson had seven offensive boards for Cleveland, but shot just 1-for-10.

The Nets complete a three-game road swing on Friday night when they visit the 3-0 New Orleans Pelicans. Cleveland is back at it Thursday night, visiting the Detroit Pistons.

Here are five takeaways from a big win for the Brooklyn Nets.

James Harden traded to Nets: In Brooklyn, it’s time to go all-in again with their trio of stars – CBS Sports