5 takeaways from a familiar-looking loss at Detroit 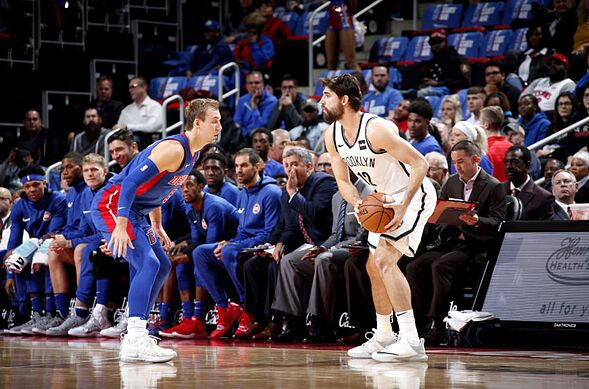 The Brooklyn Nets lost their season opener for the 6th straight season Wednesday night, blowing a big early lead and falling to the Detroit Pistons 103-100.

The 2018-19 season for the Brooklyn Nets opened with an ending eerily similar to the way many games ended in 2017-18 for the club — a strong early performance undone by problems in the second half in a narrow defeat.

In this case, the Nets fell Wednesday night to the Detroit Pistons at Little Caesars Arena 103-100, with Detroit asserting its bulk on the interior in the second half after Brooklyn had opened an early double-digit lead.

The loss is the sixth in a row for the Nets in season openers, with their last 1-0 start coming back in 2012-13, the club’s first season in Brooklyn.

It didn’t help that Brooklyn (0-1) is already behind the injury 8-ball as the season begins, with the frontcourt depth challenged as DeMarre Carroll, Rondae Hollis-Jefferson and Alan Williams sat out with injuries and the team’s shooting hamstrung by Allen Crabbe‘s absence.

By halftime, the game was tied 51-51 and the Pistons made some halftime adjustments to run the offense through Blake Griffin — whom the Nets struggled to contain — and went up by 13 midway through the third quarter.

The Nets scrambled back to within five near the end of the quarter before Griffin took advantage of rookie Rodions Kurucs deciding to engage him in the backcourt as time was winding down.

Kurucs got his arms tangled with Griffin, fouling him with 0.7 second remaining and Brooklyn already in the penalty. Griffin hit both free throws to push the Detroit lead back up to seven at 83-76 entering the final 12 minutes.

The Nets battled back in the fourth and took the lead twice inside of the 4:30 mark remaining. But after Jarrett Allen converted a nifty feed from Caris LeVert to put Brooklyn up 94-93 with 3:50 left, Detroit answered with six straight points, including four on putbacks by Andre Drummond.

With 1:14 to go, the Nets got back to within one on a four-point sequence. Spencer Dinwiddie missed the second of two free throws, but Jared Dudley got the offensive rebound and kicked the ball out to an open Joe Harris, who striped his only 3-pointer of the night to make it 101-100.

But down the stretch, Allen missed a layup after Brooklyn forced a shot-clock violation at the other end.

With 15 seconds left, Detroit committed another shot-clock violation, but Caris LeVert lost the ball out of bounds in the lane (even though replays clearly showed the ball touching Griffin while the Pistons forward was already out of bounds).

Down three, the Nets were only able to get a 3-point attempt from above the break by Harris with two defenders closing. It missed the rim and Brooklyn was sent home with a loss.

LeVert had a big night for the Nets, matching his career-high with 27 points and Dinwiddie chipped in with 23 points and six assists. Allen had 17 points, 10 rebounds and four blocks for Brooklyn, but only two of those points came after halftime.

Dudley registered three steals, but had a rough night defensively trying to contain Griffin and didn’t contribute much on the offensive end — one point on 0-of-5 shooting.

Brooklyn shot a solid 48.8 percent from the floor, but a dismal 5-for-27 from 3-point range and committed 19 turnovers, which led to 26 points for the Pistons.

The Nets outscored Detroit in the paint 66-56, but the Pistons had a 21-9 edge on second-chance points with their 14 offensive rebounds. Detroit led the overall battle of the boards, 54-51.

Brooklyn will return home for its home opener Friday night against the New York Knicks (1-0), who pummeled the Atlanta Hawks Wednesday night at home, 126-107.

Here are five takeaways from the opening-night defeat.

Jeremy Lin Upset at the Brooklyn Nets for Trading Him?
Nets discuss Detroit, rebounding, setting the tone on season opener