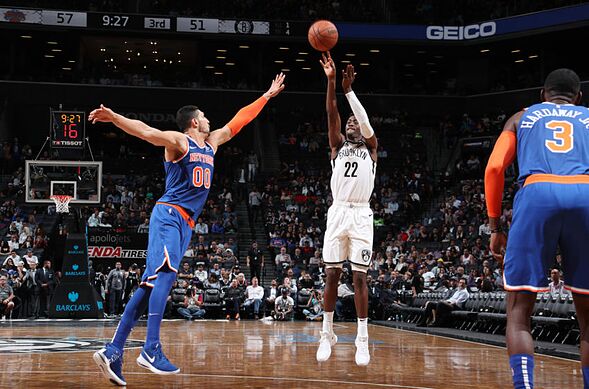 BROOKLYN, NY – OCTOBER 3: Caris LeVert #22 of the Brooklyn Nets shoots the ball against the New York Knicks during a pre-season game on October 3, 2018 at Barclays Center in Brooklyn, New York. NOTE TO USER: User expressly acknowledges and agrees that, by downloading and or using this Photograph, user is consenting to the terms and conditions of the Getty Images License Agreement. Mandatory Copyright Notice: Copyright 2018 NBAE (Photo by Nathaniel S. Butler/NBAE via Getty Images)

The Brooklyn Nets played great for roughly 10 minutes in the 1st half Wednesday. It was the other 38 minutes that went bad in a 107-102 loss to the New York Knicks.

The Brooklyn Nets opened their preseason slate Wednesday night with a performance that could best be described as … preseasony.

Brooklyn (0-1 preseason) took some advantage of New York’s giving spirit, scoring 25 points off 25 turnovers by the Knicks, but the shooting woes proved fatal to the Nets.

But New York roared back behind an enormous second quarter from undrafted free agent Allonzo Trier, with the club on a two-way contract. Trier scored 17 of his game-high 25 points in the period as the Knicks came back to lead at intermission, 50-46.

New York led by as many as 12 in the second half before the Nets made it interesting late, powered by some unexpected offensive punch from second-round pick Rodions Kurucs.

But a late turnover by undrafted rookie Nuni Omot helped the Knicks seal the win in the late going.

Did we mention the game was very … preseasony?

The teams combined for 59 personal fouls, missed 43 of the 56 3-pointers they combined to attempt and there were ragged moments aplenty, with shots missing the mark by feet rather than inches and passes thrown to the Notorious N.I.P. (no one in particular).

Caris LeVert played 21 minutes and led the Nets with 15 points, adding four steals. He showed the burst teammates and coaches had been raving about in training camp, but his shooting was erratic — 6-for-14, including 1-of-5 from long range.

Not that anyone in a white Brooklyn uniform shot well from 3-point range — which will be the case when a team shoots 19.5 percent from beyond the arc.

Spencer Dinwiddie added 13 points in 19 minutes off the bench and dished out a game-high six assists. Kurucs scored 13 points, playing just in the fourth quarter and also had four steals as the deep bench played much of the final period.

Treveon Graham finished with a team-high eight rebounds and Jarrett Allen had a pair of early blocked shots.

Enes Kanter had a huge night for the Knicks, finishing with 22 points and 20 rebounds in 27 minutes. The Nets held their own on the glass, losing the battle by a 58-57, but they could not contain Kanter.

The Nets will be idle until Monday, when they get a look at their actual opening-night opponent, the Detroit Pistons. The Pistons won their preseason opener Wednesday night with a 97-91 victory over the Thunder in Oklahoma City.

The game Monday at Little Caesars Arena in Detroit tips off at 7 p.m. Eastern.

Here are five takeaways from the Nets’ performance Wednesday: