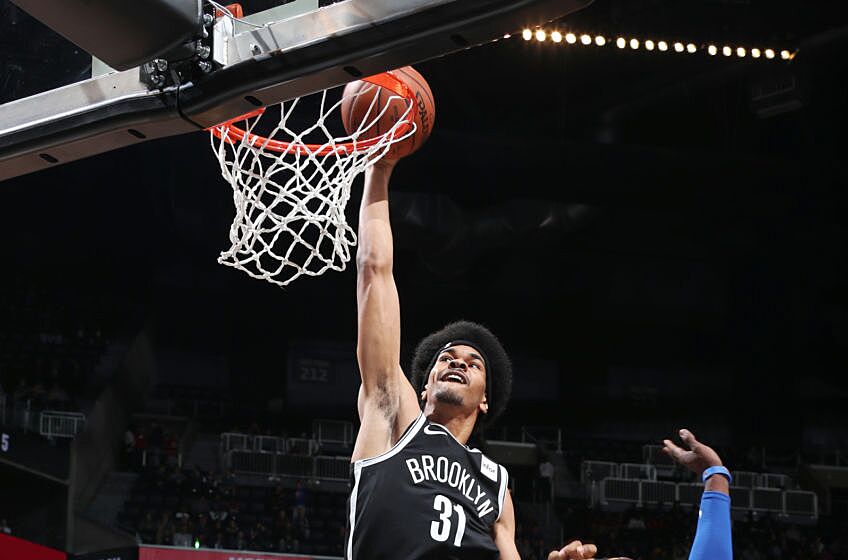 Spencer Dinwiddie hit the go-ahead 3 with 7.1 seconds left and then made the big stop Wednesday as the Brooklyn Nets beat the Detroit Pistons in OT, 120-119.

The Brooklyn Nets came back from a 10-point second-half deficit Wednesday night, snapping a three-game losing streak with a gutty 120-119 overtime victory over the Detroit Pistons at Barclays Center. The loss was Detroit’s third in a row.

But unlike Monday night at Madison Square Garden against the New York Knicks, the Nets kept scrapping and eventually found their way back into the game and took it at the end.

Spencer Dinwiddie played the hero for Brooklyn (3-5), scoring 22 of his team-high 25 points after halftime and coming up with the two biggest baskets of the night.

Trailing 110-107 late in regulation, Dinwiddie’s deep 3-pointer from above the break tied the game at 110-110 and when Reggie Jackson‘s out-of-control driving layup was off the mark as time expired for Detroit (4-3), the game went to overtime.

In the OT, the Nets trailed 117-114 with 1:12 left when Jared Dudley hit just his second basket of the game, drilling a corner 3 to tie the game, but Blake Griffin put the Pistons back on top with a short floater with 53.6 seconds to go.

Dinwiddie turned the ball over on an offensive foul, shoving off on Griffin while trying to drive past him, but Griffin missed a 3 at the other end that Joe Harris corralled.

The Nets, out of timeouts, brought the ball up and Dinwiddie, guarded by Andre Drummond off a switch, stepped back and buried a 3 from the wing to put Brooklyn up one with 7.1 seconds left.

The Pistons advanced the ball after a timeout and Griffin wound up with Dinwiddie guarding him after a screen and switch. Dinwiddie bodied the much bigger Griffin once, stopping his penetration, and then got a good contest on a turnaround fadeaway that was off the mark.

Coach Kenny Atkinson opted not to tinker with his starting lineup after the Nets had been destroyed on the backboards in Manhattan and Brooklyn attacked the glass in waves.

Despite Jarrett Allen limited to 22 minutes before fouling out and Ed Davis being in foul trouble much of the game and playing only 18 minutes, the Nets held their own with the bigger Pistons on the glass, fighting to a 55-55 draw and winning the offensive glass battle 18-14.

Detroit had an edge in second-chance points, but it was just 18-15, and Brooklyn held a huge edge in points in the paint, 62-38.

It’s a good thing, because the Nets struggled again from long range, hitting just 12-of-38 (31.6 percent) after going 11-for-38 against the Knicks.

Griffin shrugged off a slow start to finish with 25 points and four assists, but also turned the ball over six times. Griffin scored 13 of his points in the fourth quarter and overtime.

It was the first overtime game of the season for Brooklyn, which was 1-5 in games that went beyond regulation last season.

The Nets will return to action at Barclays Center at 7:30 p.m. Eastern on Friday when they host the Houston Rockets.

Here are five takeaways from an enormous win for Brooklyn.