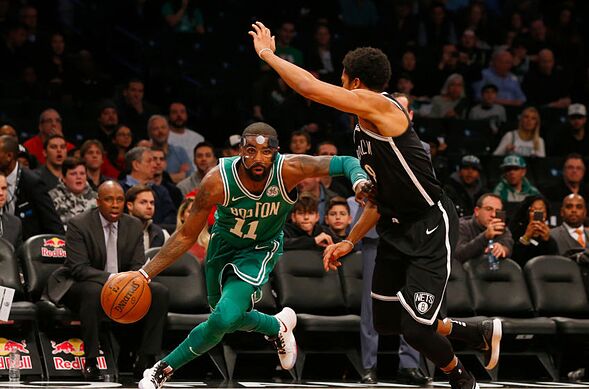 BROOKLYN, NY – NOVEMBER 14: (NEW YORK DAILIES OUT) Kyrie Irving #11 of the Boston Celtics in action against Spencer Dinwiddie #8 of the Brooklyn Nets at Barclays Center on November 14, 2017 in the Brooklyn borough of New York City. The Celtics defeated the Nets 109-102. NOTE TO USER: User expressly acknowledges and agrees that, by downloading and/or using this photograph, user is consenting to the terms and conditions of the Getty Images License Agreement. (Photo by Jim McIsaac/Getty Images)

The Brooklyn Nets went 0-4 against the Boston Celtics last season and the Cs reached the conference finals without 2 All-Stars. Hopes are high in Boston.

The Brooklyn Nets saw first-hand just how good the Boston Celtics could be in 2017-18. The Celtics beat the Nets all four times they played each other last season as Boston just found ways to win — primarily with its defense — in the first three meetings before a lopsided season finale.

Optimism is crazy high in Boston entering this season and it’s not hard to see why. The Celtics — without All-Stars Kyrie Irving and Gordon Hayward for the entire postseason — pushed the Cleveland Cavaliers to Game 7 of the Eastern Conference Finals before finally running out of gas.

Rookie Jayson Tatum had a breakout performance in the playoffs, averaging 18.5 points, 4.4 rebounds, 2.7 assists and 1.2 steals in 35.9 minutes per game on .471/.324/.845 shooting, while younger players such as Terry Rozier and Jaylen Brown also stepped up huge in the playoffs.

Irving missed the final 14 games of the regular season and all of the postseason after a knee injury, while Hayward — a big free-agent get for the Celtics in July 2017 — had his season end in just five minutes after a gruesome ankle injury on opening night.

The Celtics were second in the East last season at 55-27, carried by a defense that was the NBA’s best per 100 possessions and third in the NBA overall.

With a turbulent offseason in Toronto, can Boston jump past the Raptors and fill the vacuum at the top of the Eastern Conference left by the departure of LeBron James from the Cavs? Given how the Celtics did banged up last season, it’s hard not to think they can be better if healthy.

Nets forward working to add vital piece to his game
For Nets, rebounding improves, but shooting?