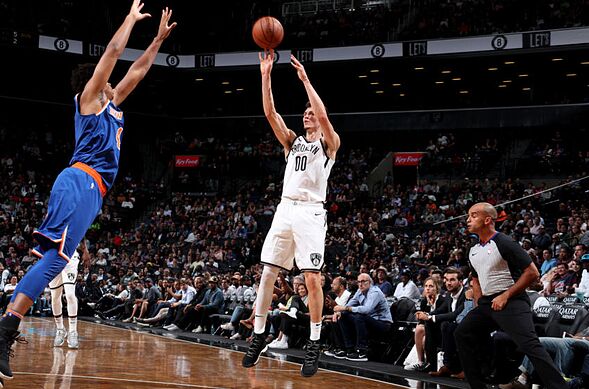 BROOKLYN, NY – OCTOBER 3: Rodions Kurucs #00 of the Brooklyn Nets shoots the ball against the New York Knicks during a pre-season game on October 3, 2018 at Barclays Center in Brooklyn, New York. NOTE TO USER: User expressly acknowledges and agrees that, by downloading and or using this Photograph, user is consenting to the terms and conditions of the Getty Images License Agreement. Mandatory Copyright Notice: Copyright 2018 NBAE (Photo by Nathaniel S. Butler/NBAE via Getty Images)

The Brooklyn Nets lost their preseason opener to the New York Knicks Wednesday night 107-102. After a second look at the game tape, here are the game grades.

The Brooklyn Nets struggled mightily from 3-point range Wednesday night — a bad thing for a pace-and-space team that relies on that shot as a weapon — in a 107-102 loss to the New York Knicks at Barclays Center to open the preseason.

Brooklyn was a woeful 8-for-41 — 19.5 percent — from deep as the offense sputtered at times, with a pair of shot clock violations and some difficulty getting into sets.

Some of this had to be a product of the preseason, as the offense flowed well in the first quarter with the starting unit on the floor and that carrired over into the second quarter when some of the reserves began to enter the game.

The Nets did turn the ball over 18 times, also a product of the preseason, with Caris LeVert committing three of those in his 21 minutes. But he also had four steals and a pair of assists and led the Nets with 15 points on 6-of-14 shooting.

At times, the offense stalled out high, as if the point guard — most often this happened with D’Angelo Russell or Spencer Dinwiddie triggering the offense — was waiting for movement and screening across the 3-point break that wasn’t happening.

But mostly, the offense sputtered because shots just weren’t falling. Open looks, wide-open looks, the Nets just had trouble with putting the orange sphere into the orange hoop.

The shot breakdown was to be expected from the system Brooklyn runs. Per stats.nba.com, the breakdown by zone was:

Here are the individual player grades from Wednesday night: