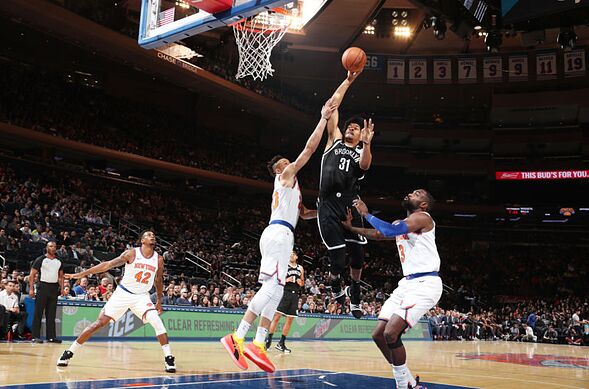 The Brooklyn Nets on Friday night closed the preseason on a high note, hanging on for a 113-107 win over the New York Knicks. Here are the player grades.

The Brooklyn Nets finished the preseason with a 2-2 record, including wins in both of their two true road games, beating the New York Knicks Friday night at Madison Square Garden.

The Nets shook off a cold start from 3-point range to can a preseason-high 15 deep balls in their best shooting performance in the tune-up games, hitting 40.5 percent (15-for-37).

The 3-point shooting performance takes on a little more context when considering the Nets missed seven of their first eight attempts from deep before canning 14-of-29 the rest of the way.

For the most part, the ball movement was crisp — even as there were still some concerns about the turnover count, which reached 18 on the night.

Brooklyn averaged 22.5 turnovers per game in their four preseason contests, a number that is unsustainable for success once the bell rings on the regular season. That number is skewed a bit by the 34-turnover performance in Montreal Wednesday night.

Jared Dudley recorded two steals for Brooklyn, which led by as many as 21 points in the third period and were up by 19 before the Knicks mounted a late run.

For Brooklyn, Allen Crabbe was out for the second straight game with a sprained left ankle and Shabazz Napier remained inactive — as he was all preseason — with a strained right hamstring.

DeMarre Carroll, Kenneth Faried, Rondae Hollis-Jefferson, Dzanan Musa, Theo Pinson and Alan Williams were held out of the game for rest or by coach’s decision.

Mitch Creek was waived Friday and wasn’t on the roster, nor were new additions Tahjere McCall, Shannon Scott and Drew Gordon.

Here are the grades on what was a good night for the Nets overall.