Player grades from a grind-it-out win at Miami 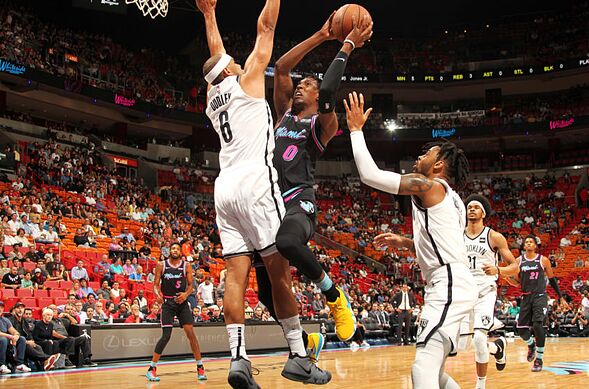 The Brooklyn Nets prevailed Tuesday night against the Miami Heat with the type of 4th quarter that usually goes the other direction.

The Brooklyn Nets had been here before — locked in a close game with chances to win, only to be overwhelmed in the fourth quarter on the way to a loss that felt like a missed opportunity.

The Nets flipped the script Tuesday night at AmericanAirlines Arena, outscoring the Miami Heat 30-15 over the final 12 minutes to grind out a tough 104-92 victory on the road.

Much has been made of the improvements Brooklyn has made defensively this season and those were on display against the Heat.

Think about this: If someone told you the Nets would shoot 43.2 percent overall and 25.8 percent from 3-point range and win by double digits, you’d have thought that individual might be just a little bit … out there.

But that’s exactly what Brooklyn did on Tuesday, because they held Miami to 36 percent shooting overall and just 21.9 percent from 3-point range.

Miami shot 68.6 percent in the painted area in last week’s win. That figure Tuesday was 41.7 percent.

Brooklyn made the shots when it had to, hitting 11-of-22 in the fourth quarter, even as they missed six of their seven 3-point attempts. Miami was just 4-for-19 in that span and misfired on all seven of its deep shots.

It was the Nets’ third consecutive win over the Heat in Miami and evened their season series at a game apiece, with two more meetings scheduled for late in the regular season.

It also improved Brooklyn to 8-10 on the year, ninth in the Eastern Conference and one game behind the Charlotte Hornets and Orlando Magic and only two games back of the fifth-place Detroit Pistons in the very early stages of a playoff race.

Inactives for the Nets on Tuesday included injured Treveon Graham (left hamstring strain) and Caris LeVert (subtalar dislocation of right foot) as well as Dzanan Musa (on assignment to Long Island Nets),. Theo Pinson and Alan Williams (both on two-way contracts and with Long Island).

Of the 12 players active for Brooklyn, Rodions Kurucs and Kenneth Faried logged DNP-CDs.

Here are the player grades from the win — not aesthetically pleasing perhaps, but a win — at Miami.