Player grades from a Halloween thriller 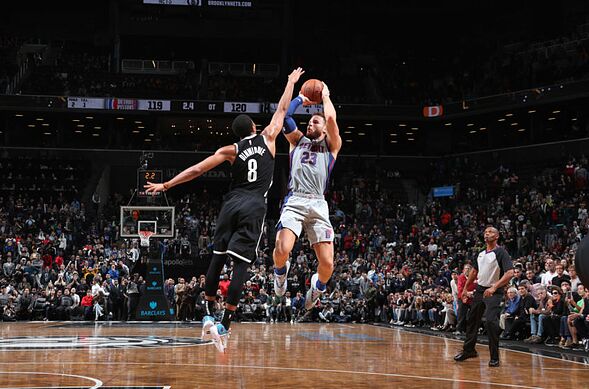 The Brooklyn Nets came back from a 10-point deficit in the 2nd half Wednesday night and clipped the Detroit Pistons in overtime 120-119. Here are the grades.

The Brooklyn Nets put a scare into their fans at Barclays Center on Halloween night when they let a 15-point first-quarter lead evaporate and turn into a 10-point deficit by the third quarter.

But then Spencer Dinwiddie treated the faithful to a gigantic fourth quarter and some late-clock heroics in both regulation and overtime in a 120-119 victory over the Detroit Pistons.

It was the first overtime game of the season for the Nets, who were just 1-5 in extra time last season, but it was also Brooklyn’s second straight overtime victory overall. The Nets won their final OT game of 2017-18 when they beat the Miami Heat 110-109 in Miami on March 31.

Prior to that, Brooklyn had lost six consecutive overtime games, a streak that began on Feb. 8, 2017. with a loss at home to the Washington Wizards.

In three games with the Pistons this season, including their preseason game in Detroit on Oct. 8, it would be an understatement to say the teams are evenly-matched.

Brooklyn won the preseason encounter in overtime, 110-108, before the Pistons won the regular-season opener in Detroit, 103-100. With last night’s decision, it means the three October games between the Nets and Pistons were played to a 330-330 cumulative score.

The Nets made a commitment to cleaning the glass Wednesday night and it resulted in battling the bigger Pistons to a 55-55 draw in total rebounds (Detroit did have 11 team rebounds to eight for Brooklyn) and the shocking stat of the night was Brooklyn’s 18-14 edge on the offensive end.

Kenneth Faried and Dzanan Musa were both DNP-CDs against the Pistons, while Alan Williams and Theo Pinson were both inactive while with the Long Island Nets of the G League as part of their two-way contracts.

Here are the player grades from Brooklyn’s scintillating victory.