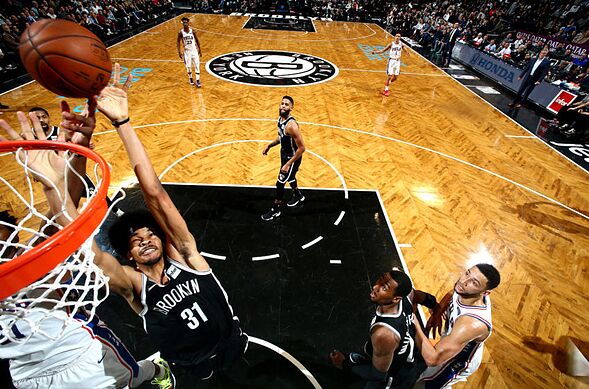 The Brooklyn Nets led most of the game Sunday, only to fall 127-125 when Jimmy Butler’s last-gasp 3-pointer capped a 22-7 finish for the Philadelphia 76ers.

The Philadelphia 76ers led the Brooklyn Nets for all of 45 seconds in Sunday’s matchup at Barclays Center, proving yet again that timing really is everything.

Jimmy Butler scored 18 of his team-high 34 points in the fourth quarter, including a step-back 3-pointer in the grille of Rondae Hollis-Jefferson with 0.4 second remaining to give Philadelphia a 127-125 win.

There are few games where the statement “they did everything but win the game” applies more completely than Sunday’s outcome does to the Nets.

Brooklyn had its highest scoring game of the season, with the 125 points eclipsing the 122 the Nets put up in their 122-97 win over Philadelphia on Nov. 4. It was the first time all season Brooklyn shot better than 50 percent in a game, hitting 56.8 percent overall (50-for-88).

At 10-for-25 from 3-point range, it was the seventh time this season the Nets reached at least 40 percent from deep. Their 68-point first half was their most prolific first 24 minutes of the season and their second-best half overall, behind the 71 points they hung on the 76ers three weeks earlier.

Brooklyn did so many things well Sunday night. But in crunch time, they could not get a stop. When they did get a missed shot, the Nets failed both times to close out the possession with a rebound. The lone stop the Nets had over the final stretch was on a Philadelphia turnover.

The Nets dressed 11 for the game, with Kenneth Faried getting his 13th DNP-CD of the season and Treveon Graham not dressed due to his left hamstring strain.

Brooklyn had the maximum five players inactive Sunday. Besides injured Caris LeVert (dislocated right foot), Dzanan Musa and Rodions Kurucs were on assignment to the Long Island Nets of the NBA G League and two-way players Theo Pinson and Alan Williams were also with Long Island.

Here are the player grades from a difficult loss to swallow.