Player grades from loss to Warriors 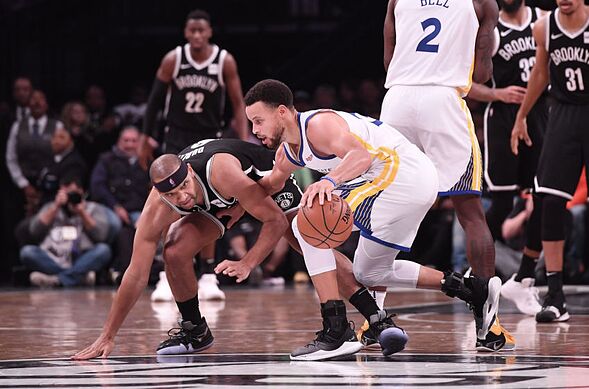 The Brooklyn Nets made it interesting Sunday night, cutting a 19-point deficit to just 2 before falling to the Golden State Warriors.

The next step for the Brooklyn Nets when hosting the Golden State Warriors: Maybe not so much with the falling way behind.

For the second straight season at Barclays Center, the Nets dug a deep hole for themselves against the defending champion Warriors and nearly found a way to dig all the way back out of it.

On Nov. 19, the Nets were down by as much as 28 points to the Warriors before getting as close as four in a 118-111 loss. Sunday night, the margin got to 19 points in the third quarter and 16 at the start of the fourth before a dogged comeback fell just short.

Brooklyn cut the Golden State lead to just two at 110-108 before Kevin Durant steadied the ship for the Warriors with a mid-range jumper and Stephen Curry applied the dagger with 1:08 remaining by burying a 3-pointer, his seventh of the night, in a game the Nets lost 120-114.

The loss — Brooklyn’s second in a row — dropped the Nets to 2-4 on the season, while the Warriors are a Western Conference-leading 6-1 with their fourth straight win. It was also Golden State’s seventh straight win overall against the Nets.

The moral victory narrative gets frustrating at times, but you have to like what the Nets showed Sunday night. This was a game they easily could have mailed in at several points in the second half and for valid reasons.

It was the first game of a back-to-back which concludes Monday night against the New York Knicks at Madison Square Garden and few fans would have — in the big picture — begrudged Brooklyn an opportunity to rest guys in anticipation of a more winnable game.

But instead the Nets battled their butts off, pushed the Warriors into a legitimate finish and in the process, won some respect and built some momentum to carry to Manhattan.

The Nets had Kenneth Faried and Dzanan Musa active, but they did not play via coach’s decision.

Here are the player grades from Sunday night’s loss.