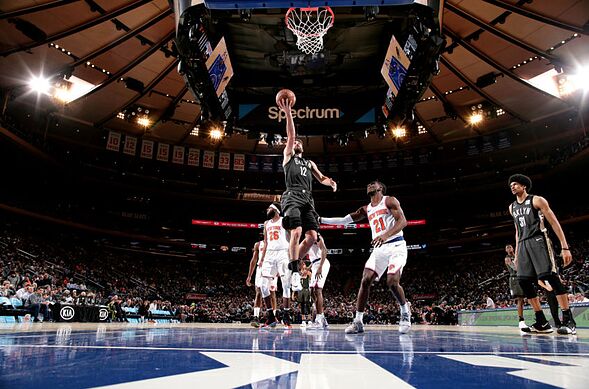 The Brooklyn Nets lost their 3rd straight game Monday night, falling in a listless performance 115-96 to the New York Knicks. Here are the player grades.

Things started well for the Brooklyn Nets, who hit 4-of-6 from 3-point range and 5-for-7 overall while roaring out to a quick nine-point lead. It was the remaining 45-plus minutes that proved problematic in a 115-96 loss Monday night to the New York Knicks at Madison Square Garden.

The Nets were outscored 111-81 after that initial run and were outplayed in nearly every facet of the game.

The Nets were also demolished on the backboards as the Knicks held a 53-32 edge in total rebounds while outscoring Brooklyn 29-12 on second-chance points thanks to a 16-11 edge on the offensive window.

Brooklyn had no fast-break points in the game and were outscored in the paint 50-40. They trailed by as much as 25 points before getting the deficit back to 11 in the fourth quarter. From there, New York responded with a short run and coach Kenny Atkinson cleared his bench.

The one glimmer of optimism from the game was that the Nets committed a season-low 10 turnovers to the 16 miscues by the Knicks, marking the first time all season Brooklyn had fewer turnovers than its opponent.

It was just unfortunate timing that it came on a night when the shooting touch disappeared in rhythm with their energy level. For most of the game, the Nets were just lifeless and this is not a team anywhere nearly good enough to survive that.

All 12 of the players active for the game saw minutes.

The Nets (2-5) are off Tuesday before returning to Barclays Center on Wednesday for the first of three consecutive home games when they host the Detroit Pistons.

The grades were delayed mostly because going back through the video took an too much of an air of being a forensic investigator looking for clues after some sort of incident.

But here are those grades, such as they are: