Solid, but inconsistent through first 10 games 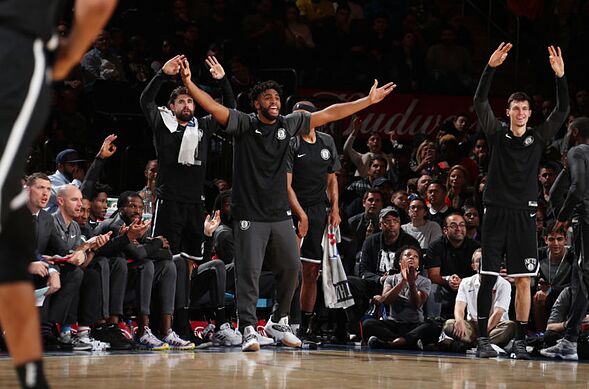 The Brooklyn Nets have now played 10 games — 5 at home and 5 on the road — and are 4-6, showing improvement and inconsistency like the young team they are.

The Brooklyn Nets have completed the first 10 games on their 2018-19 schedule with a 4-6 record. That’s a 33-win pace, for those of you who are into that sort of thing, which would be a five-game improvement from last season.

That projection is also pretty much in line with most of the preseason prognostications about Brooklyn’s chances this season — improved, but not quite enough to make a real playoff push.

Then again, given the struggles of some teams that were expected to play well but are off to slow starts, the Nets currently occupy eighth place in the Eastern Conference, in a virtual tie with the 3-5 Miami Heat and a half-game ahead of the 3-6 Orlando Magic and Atlanta Hawks.

Of the clubs currently ahead of the Nets in the East, Brooklyn lost its first meeting with the Indiana Pacers (7-3), beat the Philadelphia 76ers (6-5) Sunday night and split two games with the Detroit Pistons (4-4), with each team winning on its home floor.

This is that part where we remind everyone that the Nets are the fifth-youngest team in the NBA with an average age of 25.3, even after adding 33-year-old Jared Dudley, 29-year-old Ed Davis, 28-year-old Kenneth Faried and 27-year-old Shabazz Napier in the offseason.

So their homegrown core is really young.

That would account for some aspects of their play early this season. The Nets have been, with the exception of the blowout loss to the New York Knicks on the road on Oct. 29, solid with their effort. That was the one game where the effort was lacking and it showed.

Otherwise, the Nets have just been wildly inconsistent, even within games. They’ve had a tendency to take early leads, lose them and then have to scramble back — which is a symptom of a young team that sometimes doesn’t understand how to finish off an opponent.

So let’s break down where the Nets are through 10 games with an eye on what could be coming up in the next 10, which will bring them to roughly the quarter pole of the season (although with an 82-game schedule that would actually be at halftime of the 21st game, which doesn’t leave a lot of time to blast out a thoughtful status report).